CAA – Computer Applications and Quantitative Methods in Archaeology
CAA is an international organisation bringing together archaeologists, mathematics and computer scientists. Its aims are to encourage communication between these disciplines, to provide a survey of present work in the field and to stimulate discussion and future progress.

ArcGIS is an integrated collection of GIS software products that provides a standards-based platform for spatial analysis, data management, and mapping. ArcGIS is scalable and can be integrated with other enterprise systems such as work order management, business intelligence, and executive dashboards. 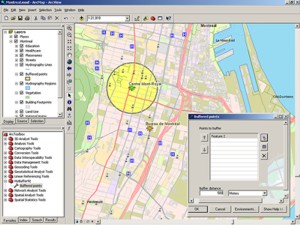 Surfer is a contouring and 3D surface mapping program that runs under Microsoft Windows. It quickly and easily converts your data into outstanding contour, surface, wireframe, vector, image, shaded relief, and post maps. Virtually all aspects of your maps can be customized to produce exactly the presentation you want. Producing publication quality maps has never been quicker or easier.

The Bonn Archaeological Software Package (BASP) is a non-profit software project for and by archaeologists which has been developed cooperatively since 1973. It now includes more than 70 functions for seriation, clustering, correspondance analysis, and mapping tools for archaeologists working with IBM compatible PC’s under DOS and all versions of Windows. It also includes programs for three dimensional display of data, for finding rectangular structures in scanned excavation plans containing thousands of postholes, and for the rectification of extremely oblique aerial photographs and their superimposition on large-scale scanned maps under Windows NT/2000/XP/Vista and Windows 95/98/ME.

Proleg StratiGraf 3.6 is the complete framework for field archaeologists that allows you to record, document, analyse and interpret archaeological sites. It integrates in a single place field registration data, photography, bibliography, artifacts inventory, the archaeological drawing and the harris matrix, creating thus, a real Digital Model of the excavation . The model provides you with a vision of what the site is really like and therefore the ability to act and interpret based on totally reliable information. 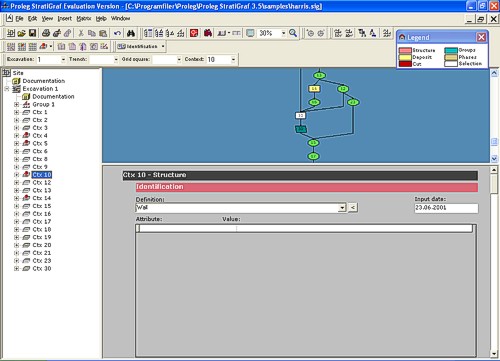 Proleg MatrixBuilder is a unique software for archaeologists that automatically generates a fully customizable and error-free Harris Matrix taking into account all context chronologies. Contexts are positioned taking into account stratigraphy and chronologies. While entering your stratigraphic relationships, these are analized in order to check consistency and the matrix is drawn by a simple click. 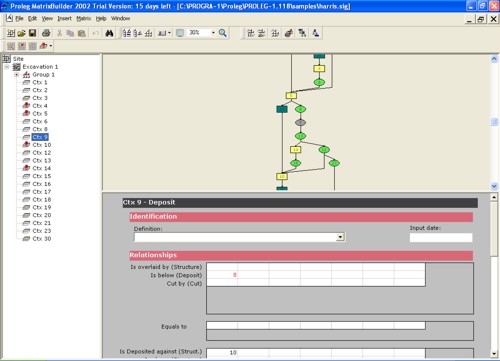 When used in conjunction, the various ArcTron software components form a complete archaeological information system. The corner stone of this system is the ArcTron CAD application, ArchaeoCAD. ArchaeoCAD itself is an application for AutoCAD, the standard CAD software from AutoDesk. 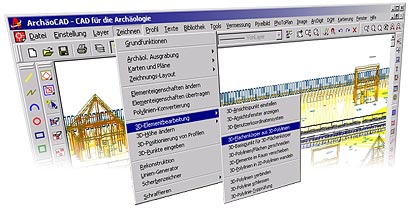 GRED 3D Archeo is a professional software instrument dedicated to archeological research. The software can identify structures using both automatic and manual procedures, and can display up to 8 parallel radar maps simultaneously and run these sections with an automatic scrolling function. All the radar data are stored in a relational data base both to maintain a historical archive and to permit rapid and efficient data searching and selection. The highly interactive environment has been designed to efficiently manage the large quantity of data acquired by the RIS MF Hi-Mod system. 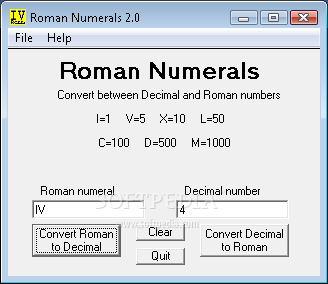 CalPal is developed to support chronological studies in the glacial periods, back to the very limits of the radiocarbon method at ca. 50 ka BP.
CalPal is a program package written in Fortran 95 (Lahey LF95 v5.7 compiler) with user interface and graphic routines based on Winteracter 7.1. The integrated radiocarbon database management makes use of F90SQL.
CalPal allows you to calibrate your 14C-data by four different routines, all of which are made to produce high-quality vector-graphs. The graphs can be viewed on the screen and/or sent to any WIN-printer. The graphs may be converted and exported as HP-GL, PS, EPS, BMP, PCX, PNG, CGM, WMF, DXF, and SVG, as well as via clipboard. Numeric radiocarbon database import and export is possible with a user-friendly SQL-dialog (which steers the ODBC interface), and also through the clipboard. Radiocarbon Data Entry is (optionally) in fixed ASCII-format, using a gridded spreadsheet, or via Excel-Import.
Numeric resolution is 1 year on both time scales (14C and calendric). 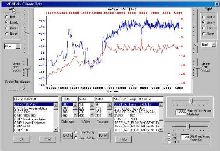 Site Recorder 4 is a versatile, Geographic Information System (GIS) and Information Management System (IMS) designed for use in maritime, freshwater and intertidal archaeology. Site Recorder 4 is powerful, practical and easy to use for real time data collection, decision support, publication, archiving and data migration. The program has been designed by archaeologists for archaeologists so you don’t need to be an expert to use it.
The current use of Geographic Information Systems (GIS) in maritime archaeology often emphasise their analytical capabilities however another major strength is their ability to integrate and manage large and dive rs e data sets. Site Recorder can therefore be used as a tool to aid the recording and preservation of cultural heritage sites by collecting together and presenting site information in an integrated and meaningful way.
Unlike most other GIS programs, Site Recorder is designed for collecting information not simply displaying it. The program has been designed for collecting data during fieldwork and creating site plans. Site Recorder can manage thousands of finds, photographs, survey data, dive logs, samples and documents – all the information relating to an underwater or intertidal site. Items can be associated with one another allowing quick and easy retrieval for analysis and interpretation.
Site Recorder has been designed to replace the many separate surveying, drawing, finds handing and reporting programs usually used on site with one fully-featured GIS. You can draw ‘live’ site plans that connect the positions of finds drawn on the plan with the positions of survey points, so the plans adapt and improve as more survey and recording data is added. 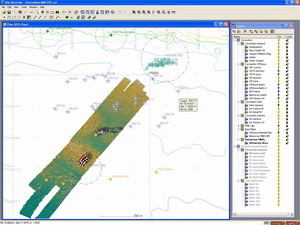 Intrasis is a GIS designed to handle and structure archaeological documentation and field data. The software is flexible and user friendly.
By using Intrasis all data related to one excavation or site becomes easy accessible and possible to combine. This increases the possibilities of interdisciplinary research when data from for example osteology or paleo-ecology can be combined with the archaeological information.
The system is developed by Archaeological Excavations Department of National Heritage Board , Sweden (UV).
Intrasis has since April 2000 been used at all archaeological excavations at UV and is today used by all major archaeological institutions in Sweden. It is also used in e.g. Denmark, Norway, Iceland and Great Britain. 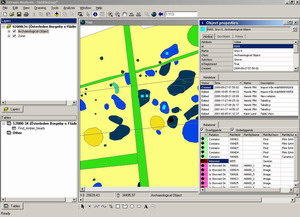 The Harris Matrix Composer is based on single excavation projects. A new excavation project starts with a minimal but valid Harris Matrix. It consists of the top surface of the excavation site – the unexcavated archaeological stratification – and the interface to the geological stratification.
Create new units of stratification i.e. surfaces or deposits by selecting the corresponding tool on the toolbar and clicking into the position where you like them to be placed. Units of stratification are shown in red as long as they are invalid. Each unit of stratification except the preset top surface and the interface to geology must be set in stratigraphic relation with at least one unit above and at least one below it to be valid.
Use the tool for stratigraphic relations and set the relation (above) by drawing an edge from the unit that is above to the one that is below. Most invalid relations are recognized as you try to draw them and declined. See the status bar at the bottom of the window for an explanation of the reasons. If a valid target has been chosen a directed edge will connect both units and its arrow head indicates which one is below the other. 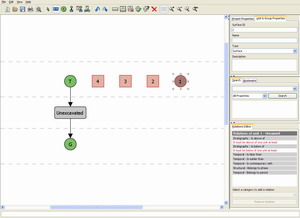